e-Bus Coupling is a family of multiprotocol intelligent coupling units that are connected to the e-Touch Flexi touch panels, to provide a communication protocol or also different inputs and outputs to perform a control solution over a lighting system, management of scenes, blinds or curtains automation or any other control required in the installation.

Different models of coupling units e-Bus Coupling device are available: some models with communication protocol to integrate into a BMS control system, and some others with physical inputs and outputs to manage a control system.

e-Bus Coupling has an standard format that can be installed in a universal 66x66 mm wall mount enclosure and includes some holes at 60x60 mm to fix into standard enclosure.

This device includes all the lighting control functions like switch on, switch off, light dimming and scene control, over one luminary, a group of luminaires or all the luminaires connected to the DALI bus. The device is including the control for single colour luminaires, with temperature control, RGB or RGBW type, with or without dimming, and is used in combination of any touch switch e-Touch Flexi or e-Touch Panel to connect over the DALI bus. The coupling unit is powered directly at mains and is including an internal DALI power supply to power the communication bus and the luminaires connected to the bus, so that it’s not necessary to add any other element for its operation. The device is configured through the wireless NFC technology with the eConfigurator APP, available for Android in Google Play Store.

The device includes all the functions to control the luminaires connected to the DALI bus. The following list shows the lighting control functions available:

All the explained functions can be executed using one of the three following control functions:

In order to do the control over a group of luminaires (Group) or over a single luminary (Short Address) it is mandatory to previously configure the luminaries using a DALI configuration tool available in the market through any DALI driver manufacturer.

The device is including a timer to configure lights to automatically switch off.

The device has a led indicator in front of it marked as “State” that indicates the operating state of the device. When the touch switch is not connected to the bus coupling unit, the led indicator flashes every 5 seconds, indicating that it works correctly.

When powering the device and the bus coupling unit has detected a touch switch connected to it, the led indicator will light up during 2 seconds and then will blink when transmitting or receiving DALI messages. This sequence can be seen if the touch switch is mounted temporarily without the frame.

The device has a led indicator in the side of the box, marked as SL, that shows the DALI bus activity.

The device is installed in a universal flush mounting enclosure or also in a plasterboard enclosure, plus any touch switch of the e-Touch Flexi or e-Touch Panel family products. 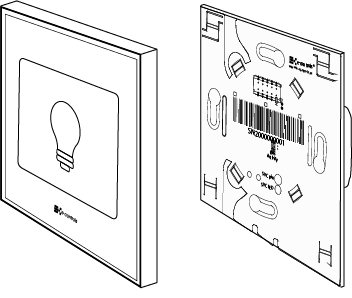 Read carefully the installation steps of the device explained below.

• In order to do the e-Bus Coupling DALI Master operational, any e-Touch Flexi or e-Touch Panel device must be connected to the device.

• Follow the recommendations of the DALI standard for the wiring installation in the building.

Mounting steps of the device:

Request more information of the product